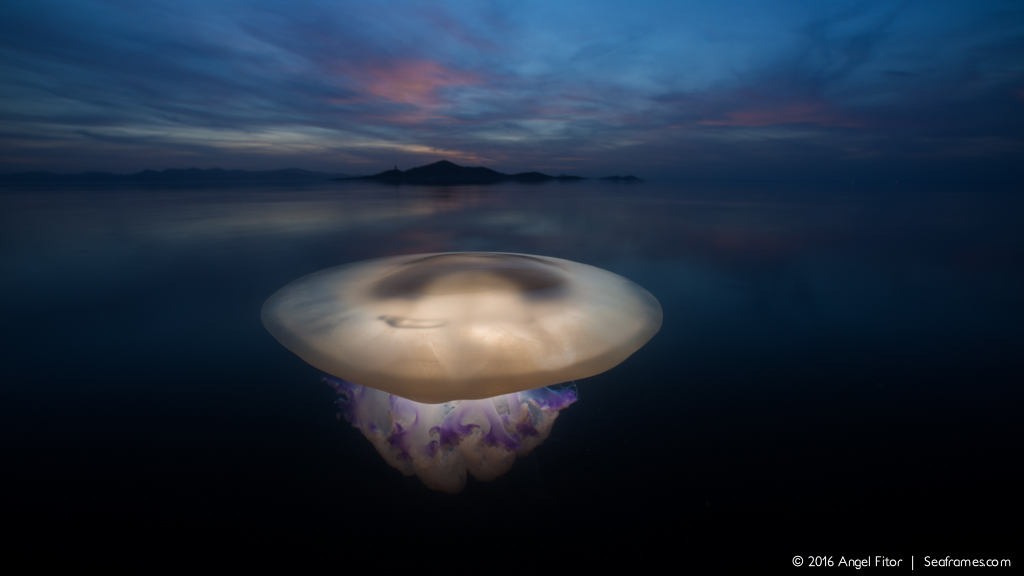 Dying of the Light: A quick guide to slow photography

Inspiration is a puzzling issue. It can hide behind a William Turner painting, a Freddie Mercury song, or a Brian Skerry photograph, but also in a jar of mermelade, or in a traffic jam after a bad day at work. However, among the endless sources of inspiration we are surrounded by, I find plain empathy one of the most powerful. Exploring the many truths out of our own can be as challenging as enriching. I would say empathy is in fact among the most difficult virtues to achieve in life, simply because is basically about split your mind from your body, making it travel across the distance and circumstances, then placing it inside anyone else´s mind, understanding it, and then make it back home. Easy, isn´t it?. It would, if we were not basically egocentric beings. One of my favourite vehicles to experience the empathy trip is a book. Reading is maybe the closest approach to caress the reality of anyone else´s mind.

This being so, at this point you might have probably realised that this is not going to be a photo tutorial post. So sorry. Instead, this is all about that boring and irrelevant ingredient of photography that will never appear on your reputable fashionable photo recipes blog. Additionally, my disgusting sarcasm could be unbearable. In the name of honesty, you are warned.

In the summer of 2011 I was reading “Over the Edge of the World: Magellan’s Terrifying Circumnavigation of the Globe” by Laurence Bergreen. As a collateral damage of such reading, the mindblowing idea of a flat Earth started to circle around my mind. And here empathy came into scene. I started to try to put myself in the shoes of the people who lived in that pre-spheric Earth age, actually nothing remarkable, since I am not always sure about which day of the week I am. Trying to feel their beliefs, their fears, their prejudices; wow, that was a trip!

Within a flat Earth scenario, trying to imagine whatever people at that time had in mind before the sun broke up the horizon, brought into my mind the possibility that it could actually have been anything. This obviously included hallucinatory options like marine creatures transforming into huge incandescent balls as they raised up from the “Edge of the World” line. Why not?, what the hell, they did believe that the Earth was flat!

Back from the lunatic asylum, some earhtly ideas started to develop. Seriously. 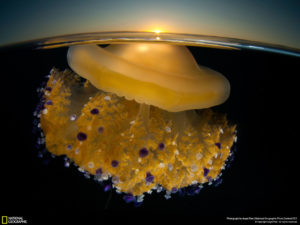 Whether a plausible visual fable, or simply the dream of a lunatic, Sunrising Jellyfish was a milestone in my career, and the start of an in-depth understanding of the magic that lives inside a jellyfish.

And this was how in the fall of the same year I produced the “Sunrising Jellyfish”, popularized by National Geographic http://ngm.nationalgeographic.com/ngm/photo-contest/2011/entries/gallery/nature-winners/. Even though I will probably never know if they awarded my fable, the technique, or both, I will always prefer thinking they did the former because it was right there where my very personal contrubution lay. This was not the case of a part of the audience who didn´t understand anything about narrative nor tales, but they only understood that it got an award. Obviusly the Earth is flat…

Despite I didn´t invented the technique, at that time I was really overwhelmed about the wave of “sunrise/sunset inspiration” that suddenly swept the U/W photo community, but I have to admit I felt really outraged that many people needed a photograph to discover that Earth wasn´t flat!, I still wonder, did they?

Quite often the boundary between inspiration and plagiarism is as thick as the thickness of the honesty, the goodness, the common sense, and specially, the self-steem of the “inspired photographer”, values that aparently are following the same fate than the classic meaning of photography.

Photography has expanded to an unthinkable level of popularity since the beginning of the digital revolution. A mine for business, a dark tunnel for the expression of the individual human soul. It has grew to a point that now is in hands of the People, and not anymore exclusively in those of a reduced group of so-called artists. Those that speak a language they only can understand, and yet whose works have the ability to reach the heart of the people. The transformation has brought a number of new meanings to photography, including those that has more to do with social behaviour, than with individual freedom. Society vs. individual?, sounds familiar isn´t it?. Now those “intellectual” approaches to photography are getting increasingly further and further away from popular understanding, and even worst, acceptancy. They are being simply cornered and smashed under the numeric weight of popularity. Democracy is now dictating that photographic talent is a universal feature. The phenomenon is obviously not restricted to photography, quite the opposite, it is a widespread global trend infecting every artistic job framed in what some authors have called “the unstoppable wave of anti-intellectualism that is devastating everything”. Time will tell about the overall result of such transformation.

Back into orthodoxy, that photograph marked actually the begginning of my own comprehensive visual exploration of jellyfish in Mar Menor, and thus the start of a vast body of work which irretrievably ended up with the Dying of the Light photograph, as you will see hereunder. During all these years I have tried to do my best to expand my visual approach towards such delicate and intringuing creatures. I have portrayed them during day and night, under the sun and under the moon, under clear sky and under the storm; I have frozen them in a fraction of a second, and I have registered their subtle movements during long exposures. In short, I have tried to squeeze their amazing visual potential with the sole restriction of my imagination. This is exactly the way I understand photography. 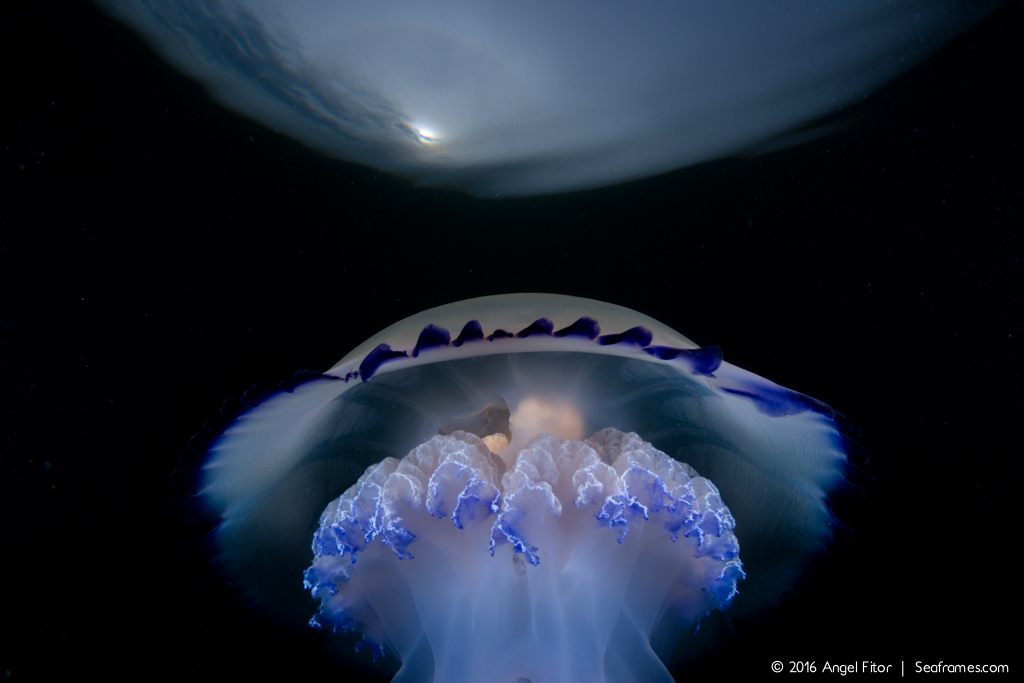 A barrel jellyfish softly pulses its umbrella to stay close to the moon.

Mar Menor is the largest coastal lagoon in Europe, and it could easily be one of the very few places on Earth where beautiful jellyfish deal with an almost surrealistic calm water surface, coupled with amazing low lights. The natural environment of the lagoon is really unparalleled, and during the summer the jellyfish shoals easily outnumber those from the well known Jellyfish Lake in Palau. 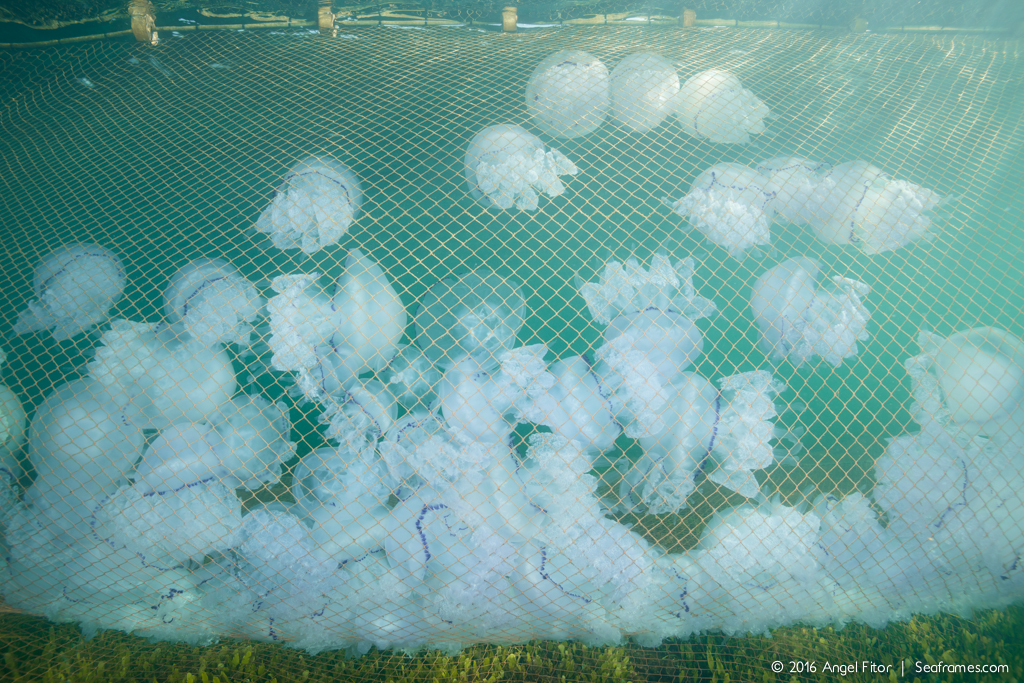 During the summery bloom, jellyfish nets are deployed in front of the beaches in Mar Menor in order to protect tourists from their stinging caresses.

Until the sixties, it was a paceful place surrounded by marshy areas and sand dunes where thousands of migratory and resident birds found shelter and food amidst a rich ecosystem. But then Spain started to sound like a fantastic place for holidays. The jellyfish population flourished when a series of channels were opened to communicate the lagoon with the Mediterranean in order to allow recreational boats to come in. A calm environment with no predators, and a warm shallow water lagoon with tons of nutrients feeding both the plankton and the jelly´s symbiotic algae made the perfect habitat for them. But in fact, during decades its overgrown population has been actually buffering and masking the increasing levels of fertilizers coming in from one the largest cultivation fields in Europe, the so-called Campo de Cartagena, a huge alluvial plain in southeast Spain, with Mar Menor being its natural runoff collector. In the menatime, the lagoon was on its way to become one of Spain´s largest touristic areas, and so its coastline was literrally collapsed by oversized villages and housing states. 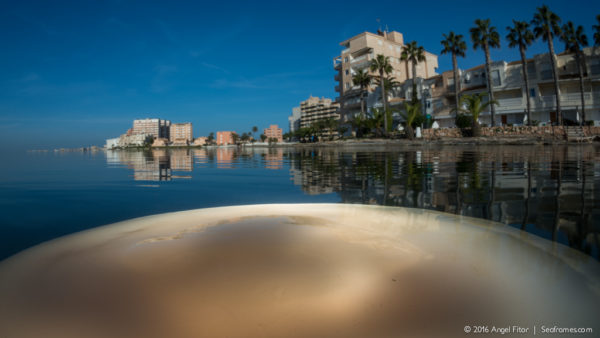 La Manga, the 22 km. sand bar that separates Mar Menor from the Mediterranean, is almost fully occupied by private properties. A unique world´s natural heritage destroyed for the August holidays of a bunch of people. 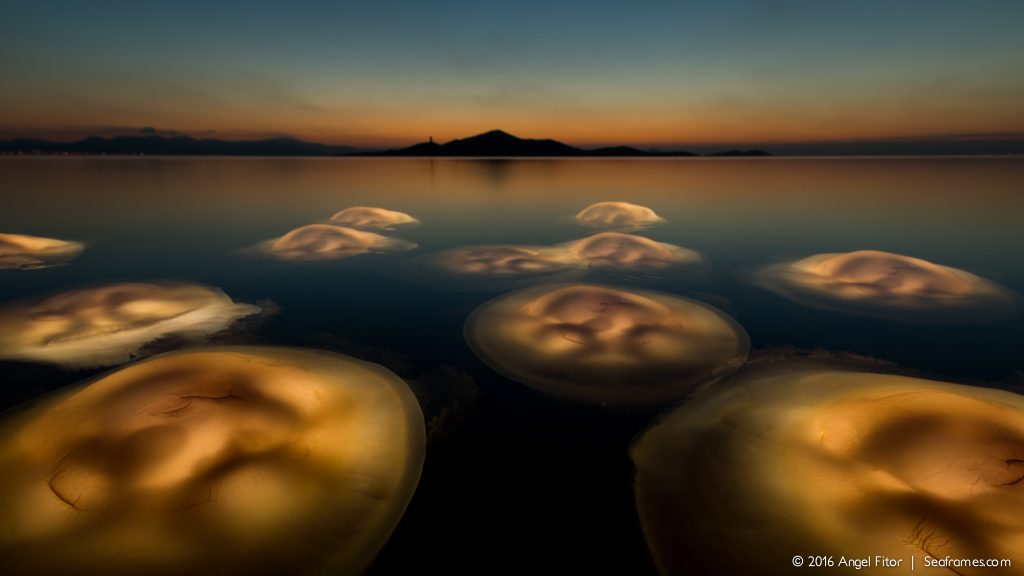 Powered by the gentle surface swirl currents caused by the broken winds coming from the gapes between buildings in La Manga, and its own pulsations, a single jellyfish generates the illusion of a shoal when flashed multiple times during a long exposure shot.

In a country without a mature environmental culture, managed by short-minded politicians, greedy investors, and ignorant landowners with the sole goal of short-term profit, the disaster was just a matter of time. Some two decades ago, the lagoon held what some scientits described as the largest seahorse population in the world. Then, they were the first victims of an unforgivable chain of mistakes, even though lately they seemed to be slowly recovering. And finally, in the early spring of 2016 the lagoon finally collapsed. The dissolved organic nutrients in the water reached a level to high to be buffered by any natural mechanism, the planktonic algae bloom happened, and the subsequent turbidity and lack of oxygen did the rest. 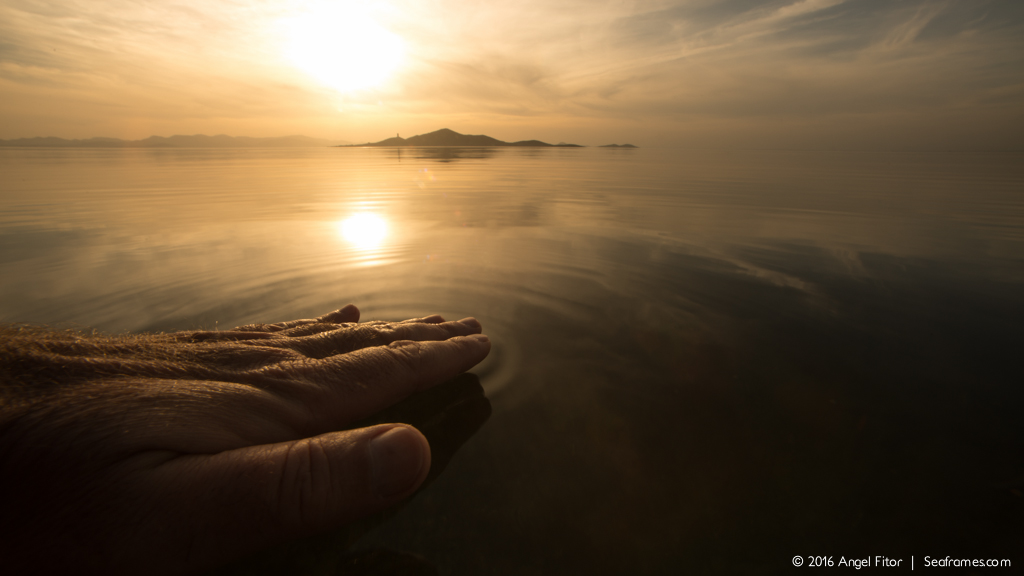 Literally, manual pre-focusing while getting ready for the final Dying of the Light shot. A making of snapshot, that later on became an act of farewell.

I had been very aware of the critical situation of the lagoon, since I started working there in the mid nineties, but it was by sheer coincidence that the photograph was taken on the very last fall before the collapse. So beyond the quiet and serene beauty of a jellyfish at dusk, the Dying of the Light unexpectedly became an icon of the death of a whole natural and cultural heritage. The passing of a unique and unrepeatble whim of nature. 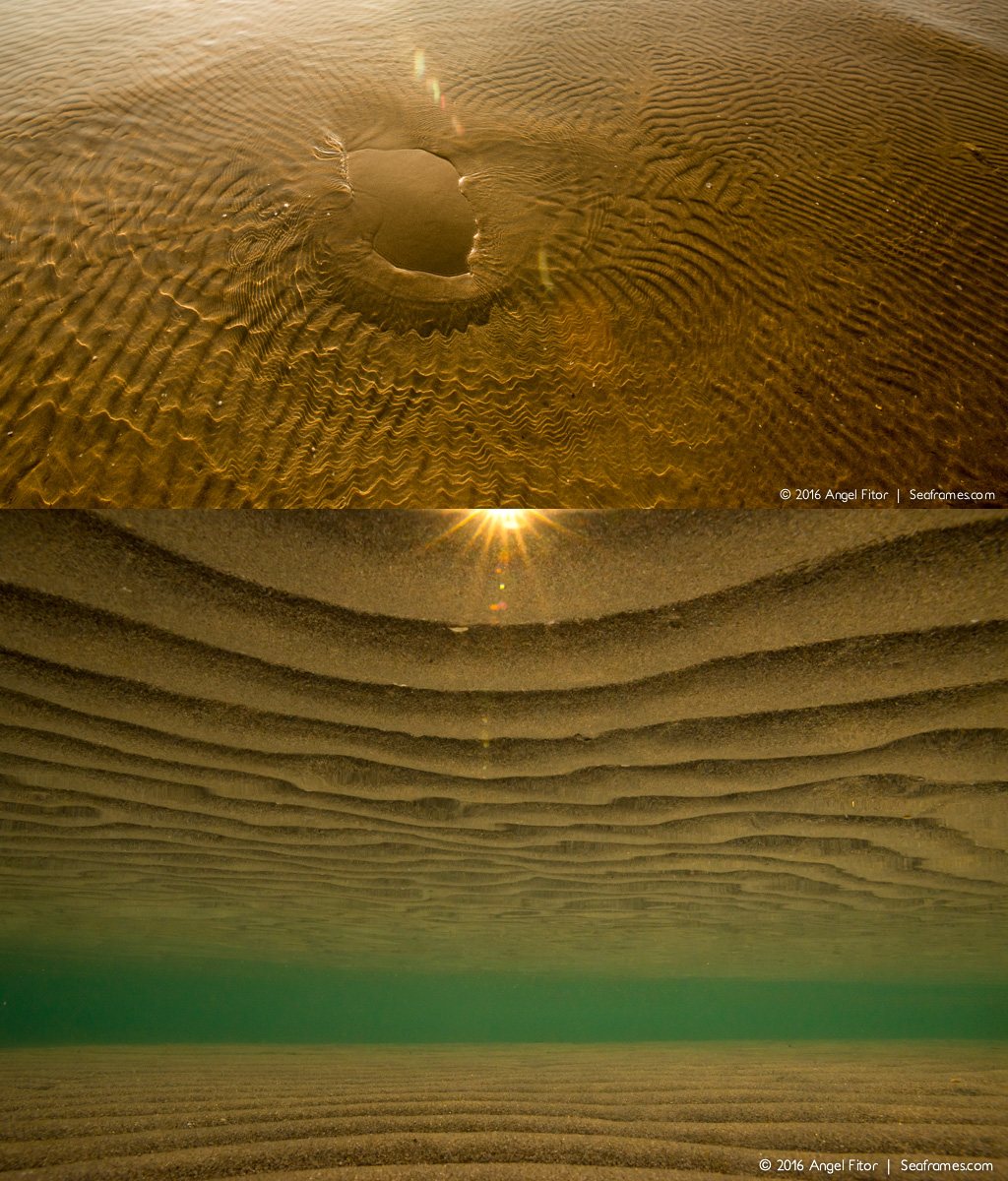 Three years in the making brought me plenty of time for failure while looking for the very few jellyfish still alive in autumn, the best topside low light season of the year. During one of those unsuccessful trips to Mar Menor, he gave a present though. #WPY51 Finalist, Impressions Category.

Certainly because of my unhealthy fascination for the Life fact itself, and most likely because of the recent passing of my father as well, the first underlying idea in the making of the Dying of the Light photograph was to enhance the uniqueness and preciousness of every single living being. Even a clone jellyfish dissapears foerever after it has gone. There will be more clones, but not that one anymore. Tightly linked to these thougths, the concept of island embodied in my mind the metaphore of such uniqueness and loneliness at the same time. In fact, I originally named the image “Living Island”, as I was trying to stablish a visual parallelism between the floating jelly and the island in the background. Somehow, we all are islands.

Light stages over a dying, motionless jelly during the creation of the Dying of the Light.

Fortunately, after being communicated the #WPY52 award, the always kind and helpful Roz Kidman Cox, the soul behind the WPY, and one of the Great Ladies in the world of Natural History Photography, suggested me a new title and approach to the story at caption writing time. And I loved it. Not only because she managed to enhance the story, but also because at that time the Mar Menor disaster was already happening. Certainly a premonitory title which could eventually help claiming some international attention about the ashaming environmental calamity.

The rest of the story happens among three years of jellyfish bitting, frustrating shooting trips, struggling with photo gear and mud, and cursing weather and tourists. Nothing extraordinary.